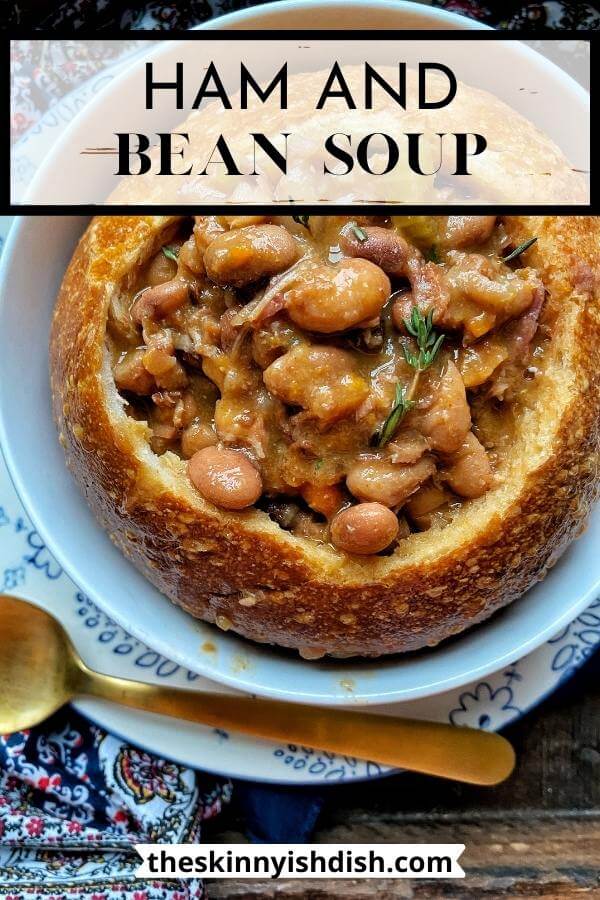 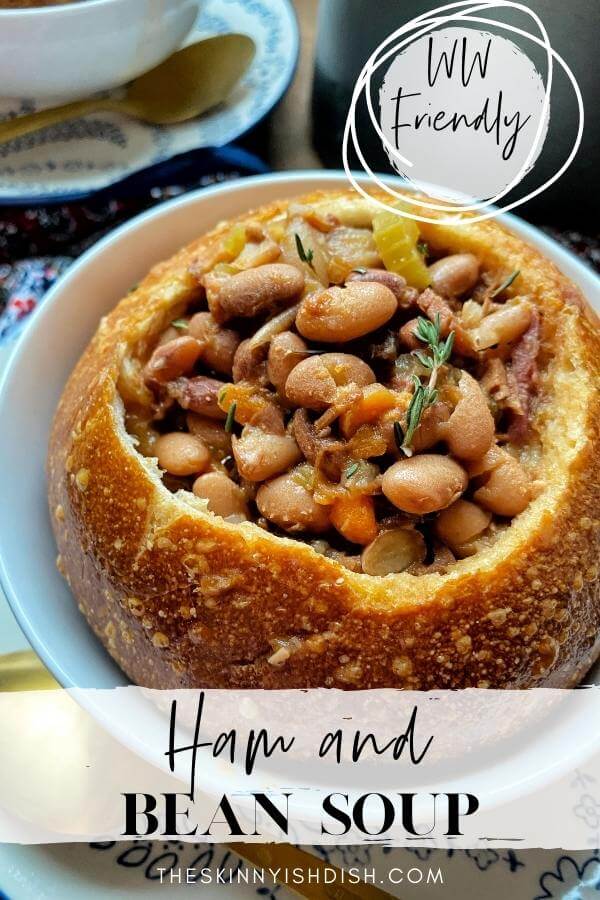 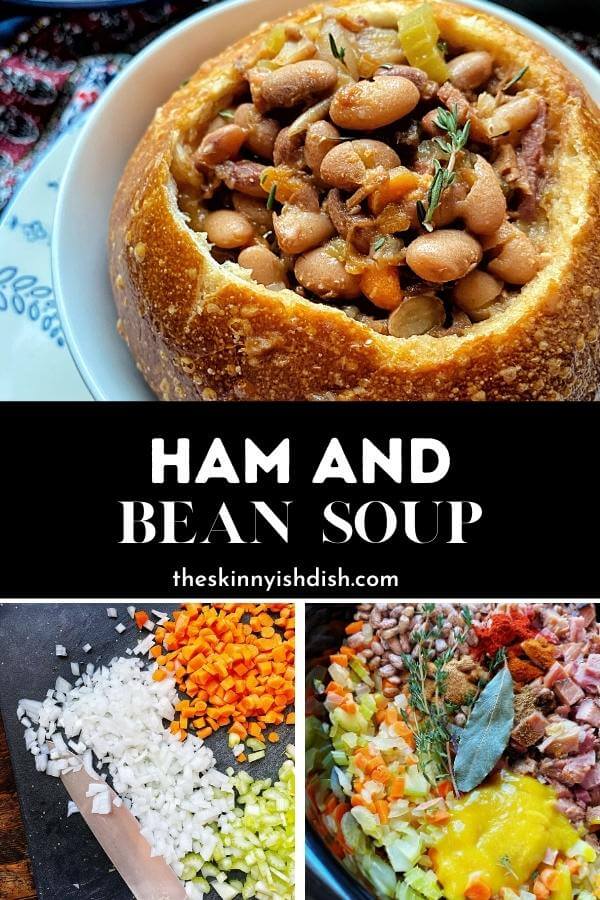 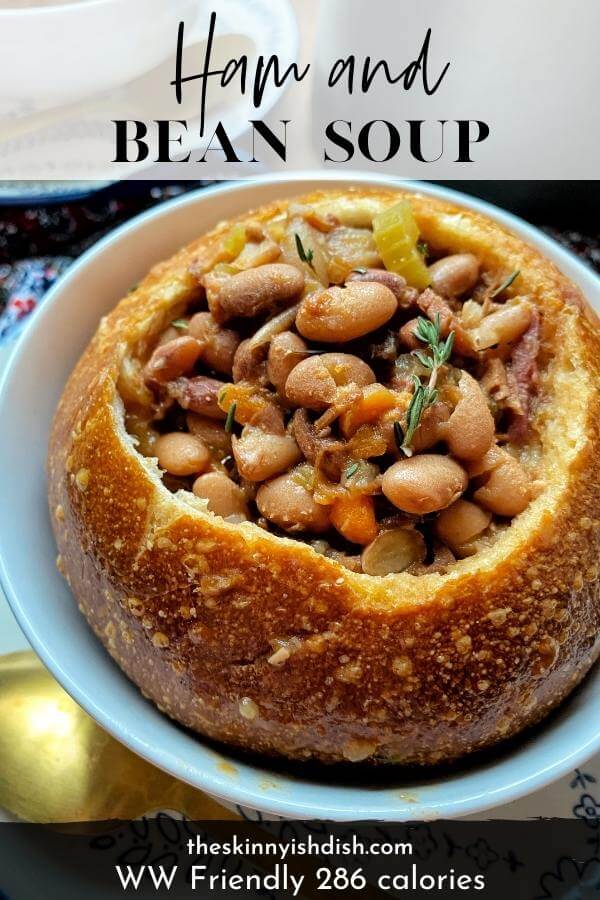 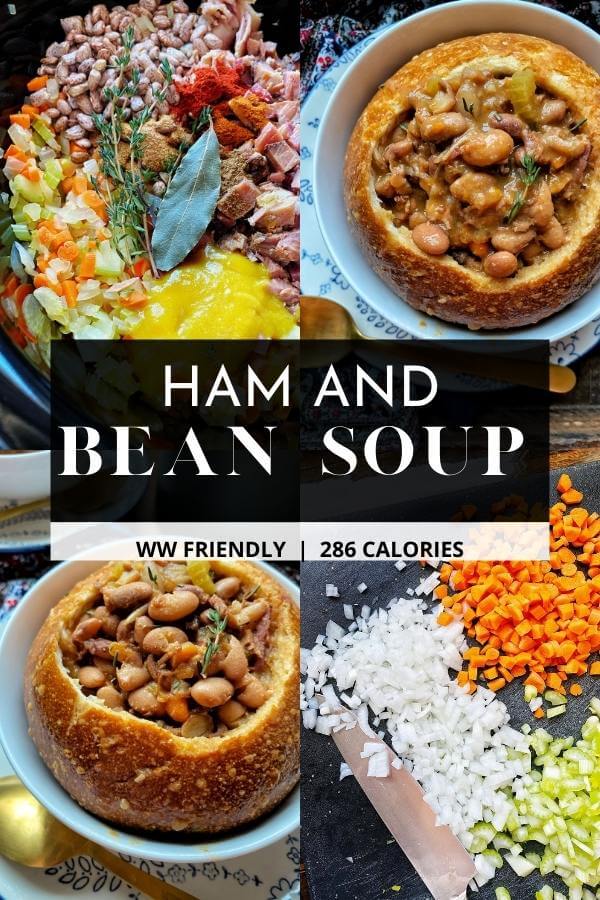 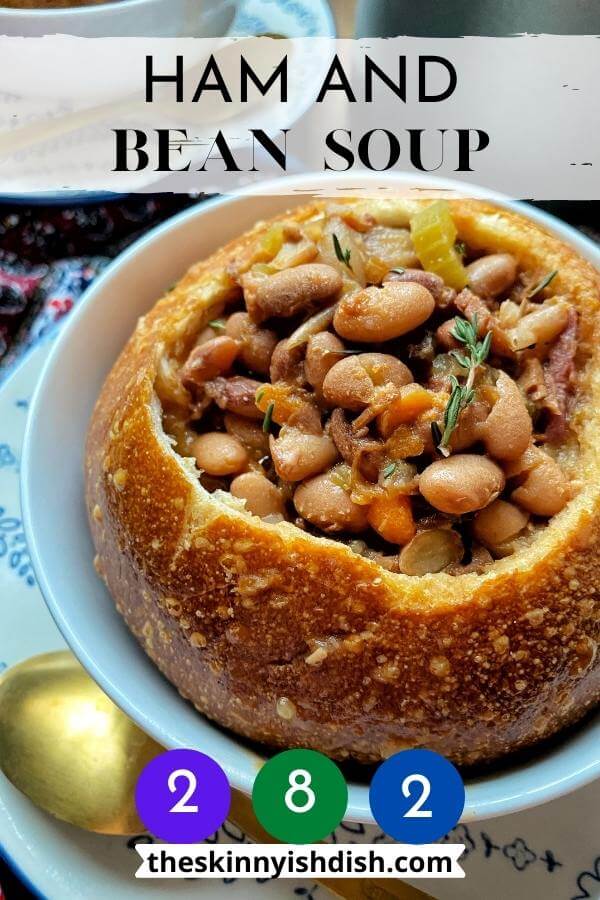 Slow Cooker Ham and Bean Soup isn’t known for it’s looks so if it doesn’t look totally appetizing to you, don’t worry. For what it lacks in looks it makes up for big time in terms of flavor!

My Slow Cooker Ham and Bean Soup is quite a bit different from the traditional ham and bean soup that I knew growing up. I add a variety of spices that I don’t think most recipes call for and I use Pinto Beans instead of Great Northern or White Kidney Beans. Pinto Beans are perfect in this soup because they’re so creamy!

Slow Cooker Ham and Bean Soup is a perfect way to use up leftover Holiday Ham! I love this soup after the holidays because it’s so hearty and full of nutrients after indulging quite a bit throughout the season. We like to eat it with a big green salad and some crusty bread. I have it pictured here in a bread bowl because exactly one hour before I took these photographs I realized Panera Bread sold their bread bowls in their bakery section and I bought two and I was so excited about it!

How to make Slow Cooker Ham and Bean Soup:

Dice up onion, celery, and carrots so you have about a cup of each!

*You don’t have to sauté the carrots, celery, and onion, but it does make for a better finished flavor!

Do I have to use leftover ham/hambone?

No. You can just use a diced up ham steak from the grocery store. Works like a charm! However, you won’t have a ham bone if you do this so you’ll have to do one thing differently, okay? If you’re not using a ham bone, you need to use 2 tbsp of the chicken or vegetable flavor Better than Bouillon. That’s it.

Using a ham bone will help develop the flavor differently, BUT it’s still really, really good without it. I make this soup twice a year with a ham bone (after Christmas and Easter) and the rest of the year I just use chopped up ham from a ham steak and then use extra bouillon.

If you’ve never had ham and bean soup, then you should absolutely start with this recipe! It’s so full of flavor. The only requirement is that you must like beans to like this soup… because it’s very bean forward. Haha

Be sure to discard the thyme sprigs and ham bone before serving and enjoy!

Ham and Bean Soup is not the prettiest soup. There’s no way around it, but it’s not supposed to be. And if you can, put it in a bread bowl. Oh my gracious it’s good!

This soup also freezes super well! Just be sure whatever you are freezing is completely cool. I like to freeze in 2 cup portions in a freezer friendly ziplock bag. Try to press as much air out of the bag as possible before cooking.

A super yummy and hearty soup perfect to use leftover ham!

*This soup also freezes super well! Just be sure whatever you are freezing is completely cool. I like to freeze in 2 cup portions in a freezer friendly ziplock bag. Try to press as much air out of the bag as possible before cooking.