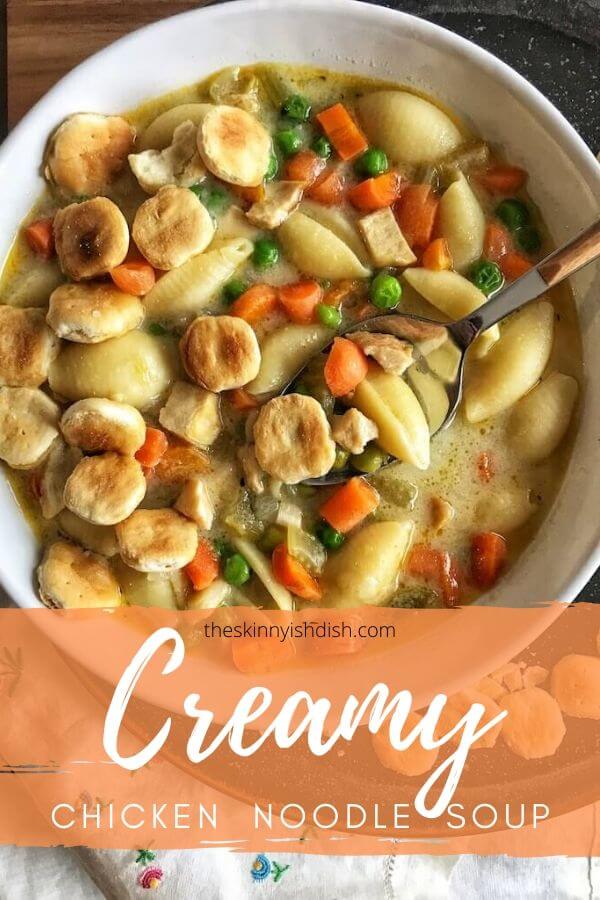 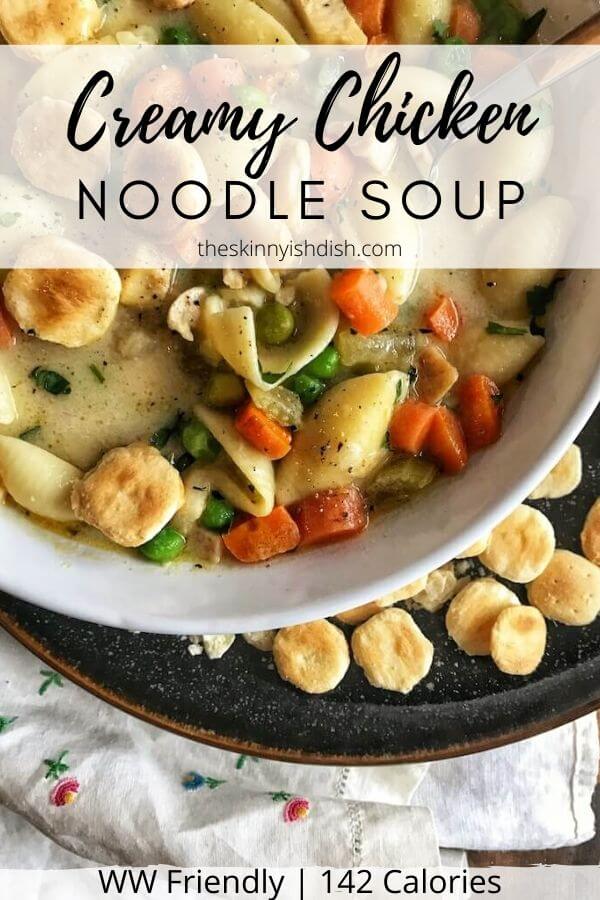 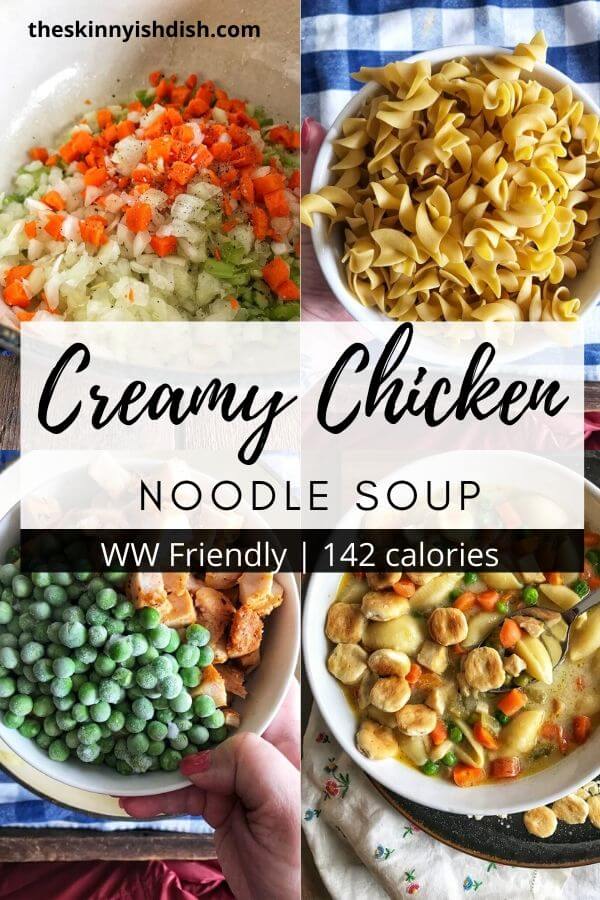 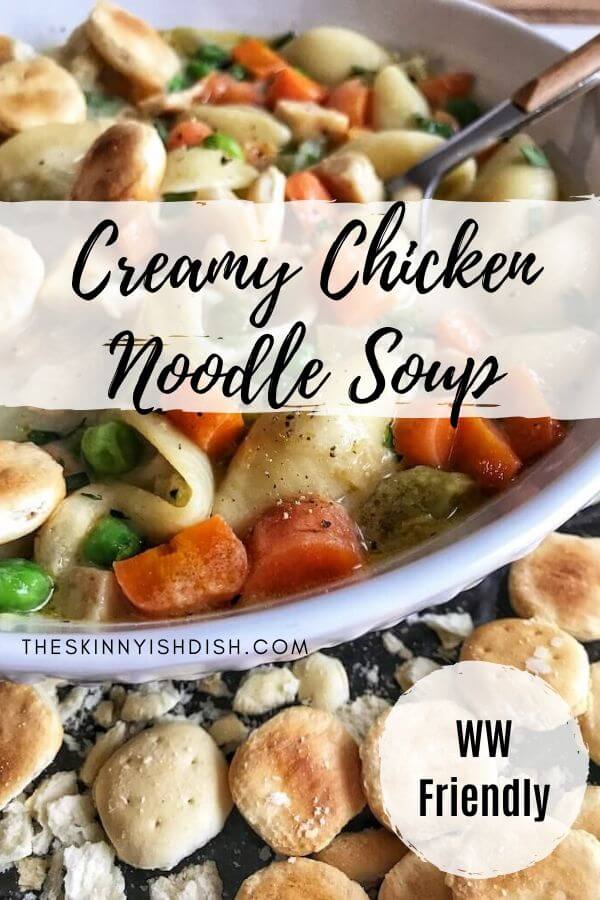 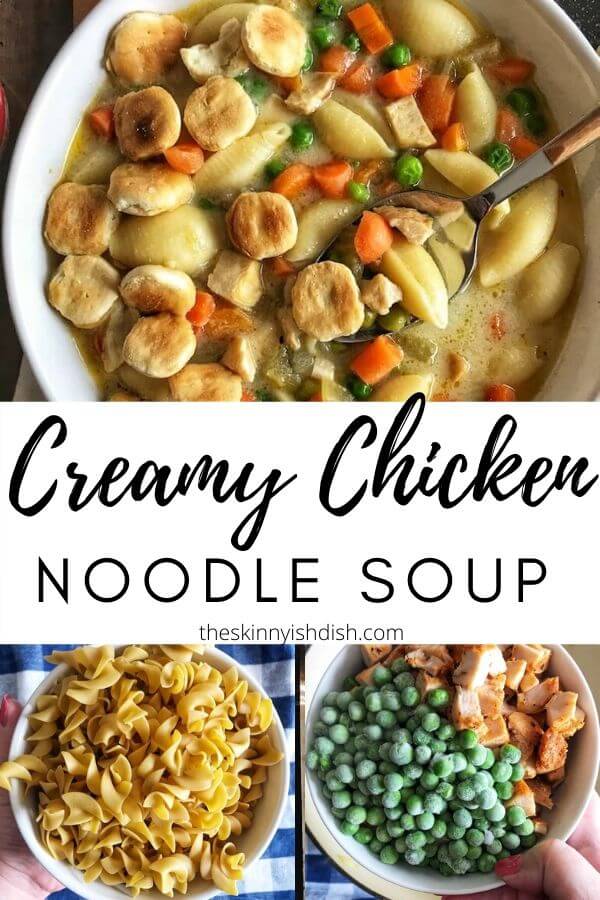 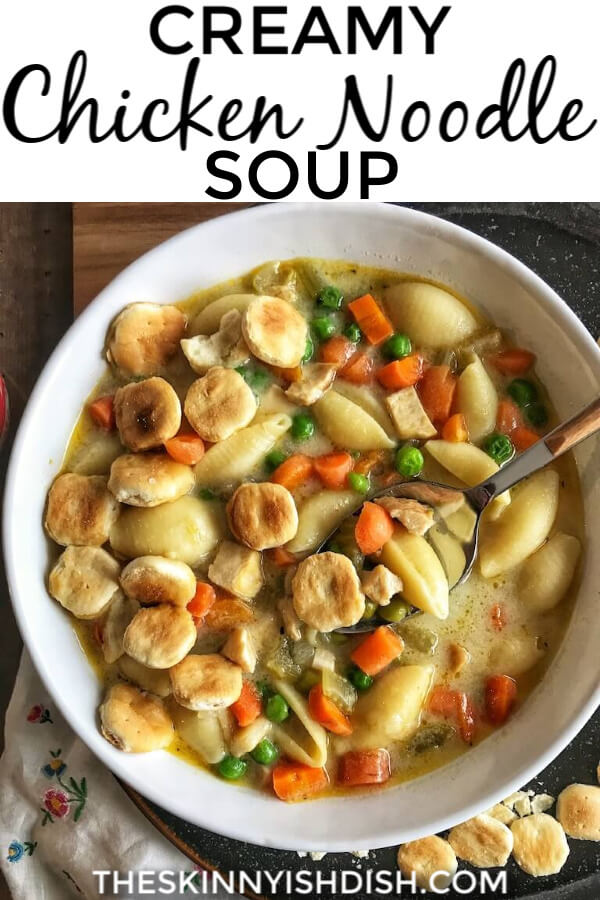 I’m going to start by telling you that every single person should have a really, really, really good Chicken Soup recipe in their back pocket. It’s pretty much a kitchen staple. This recipe is loosely based off of my Chicken Pot Pie Soup recipe so if you love that, you’ll really love this because it’s kind of like Chicken Pot Pie soup on a whole new level. But, much more broth-y goodness going on.

I swear I’ve made this soup at least 12 times in just the past month! Hello cold and flu season! It’s so flavorful and probably one of the best things to have when you’re not feeling the best. This Creamy Chicken Noodle Soup is easy enough to make so that when you are actually sick it wouldn’t be too hard to throw together. Hello mom life! In this house, we’ve all been down with multiple colds this winter and this is my go-to. Little Pepper even requests it and that says a lot for a kid who doesn’t like soup.

All that being said, this soup is too good to only make when you are sick. Trust me! I loooooove to make a big batch for lunches throughout the week and create my very own pick-two in my kitchen! Soup & a big ol’ turkey sandwich is my go to and it’s so satisfying. I honestly think this will be your new favorite Chicken Noodle Soup recipe!

Before anything else! Yer gonna need some chicken, 3 cups to be exact! You can take the extra easy way and just pick up a rotisserie chicken or you can take the homemade route and bake up a batch of my super yummy Easy Baked Chicken or make some Instant Pot Shredded Chicken. Whatever way you choose will be delish. Pictured above is my Easy Baked Chicken and it’s personally my favorite, but I’m a little biased.

Tip: make your chicken a day or two ahead of time to save time!

2. When the vegetables are softened sprinkle (just a lil at a time) 1/4 cup all purpose flour. Stir well after each addition of flour then let it all cook together for about 30 seconds.

3. Stir in 8 cups of low sodium chicken broth and 1 cup of 2% milk. After that stir in 1 tbsp of better than bouillon and if ya got it, a parmesan rind. Also, add 1/2 tsp turmeric if you want to put it in! Increase heat to medium-high and bring to a boil for a minute or two. Reduce heat to simmer for 15-20 minutes.

My secrets for the best Creamy Chicken Noodle Soup

My other tip when making creamy chicken noodle soup is to make the noodles separately! You want that delicious rich and savory broth to enjoy with each bowl, right? I sure do. Whenever I’ve made chicken noodle soup and cooked the noodles in the soup. The broth is almost non-existent especially when it comes to leftovers. I want that broth, man! So, I just decided one day. Enough was enough. I now make the noodles separately and add them as I eat. While you’re letting the soup simmer away cook the noodles according to package directions (remember to salt the water!), drain, and set aside.

So in conclusion make whatever noodles you want (I normally do egg noodles pictured above or medium shells, my personal favorite and pictured in the “finished recipe” photos. This way you can also add as many noodles as you’d like. I do a half cup of cooked pasta in my bowl and then add the points/calories to that.

After the soup as simmered for about 20ish minutes add in the frozen peas and chopped (or shredded) chicken breast. Cook for just a few minutes until everything is heated through. If you’re using parmesan rind, remove it.

And my final tip? Add oyster crackers. As many as you possibly can.

This soup is warm, inviting, scrumptious, and so gorgeous. I don’t think you’ll ever need another chicken noodle soup in your life. Truly!

I hope you love it as much as we do in this house, but mostly, if you’re not feelin’ so great- I hope it warms you right up.

Let me know how it goes if you try it!