Hey September Second, you’re lookin’ good today! Today, I’m going to share with you one of my favorite recipes in the history of recipes. These Chicken Street Tacos came together by accident and my goodness, It’s probably one of the happiest accidents that I’ve had in the kitchen to date.

It’s time for Fall. It’s 62 degrees outside right now. The windows are open. Pepper is wearing the cutest little button down jean shirt and leggings. And here I am, in my pajamas still. Mom-life at its best. Pepper will forever be better dressed than me, but I’m okay with that. I clean up alright when I get the chance. Eric even told me I was just as beautiful as the combine we saw on the road this past weekend… Okay, he said more beautiful. But, I’m being compared to a big, green combine .. so, whats the difference?

I’ve been dutifully in the kitchen whipping up some comfort classics like chicken and rice, stove top fried apples, skillet chili cheese mac, shepherds pie…. oh, I’m itching to share all of these with you, and I will!

It’s funny because I literally want to post a recipe every single day of my life. I want to get it ALL out there. I want to share EVERYTHING. RIGHT NOW!

I’m not a patient woman. Nope, not even a little.

I was telling my mom I felt this way the other day, and she said, “What’s the rush? This is something you want to do for a long time.”  I thought for a second, and I was like, “Yeah, you’re right.”

I’m always trying to make every recipe better than the last. I’m constantly trying to re-invent the wheel here, but I have to keep in mind… This isn’t a race. This isn’t a competition. This is a happy place for me to share my random thoughts and my recipes, and I hope to be doing this for YEARS to come.

With that said, I’m just going to do my thing. If you knew me in real life you would know, on a scale of one-to-perfection I’m like a negative 10. I am actually pretty laid back, I go with the flow mostly. For some reason, this blog and my recipes have made me want to be a perfectionist. So when I realized that I’ve forgotten to take a picture of an ingredient or a step, All H-E-DOUBLE HOCKEY STICKS breaks loose in the this household. Which isn’t me. I’m cool, calm, collected Star. (Except when Eric hangs his dirty laundry on the back of the kitchen chair, then all H-E-DOUBLE HOCKEY STICKS BREAKS loose!)

Maybe it’s the beautiful weather that has made me come to this realization, or maybe it’s just life has been so busy lately that I just want to sit back and relax a little bit more and enjoy my sweet family. Either way, I’m going to continue bringing y’all some delicious meals and if the photographs aren’t perfect, well, That’s life! Pretty photographs don’t make the food taste better and that’s a fact, Jack!

Now with all that said here’s a little chicken street taco talk for you.

What’s the different between street tacos and tacos?

I don’t know. I have no idea. Please don’t ask me again.

Here’s my take on Chicken Street Tacos. They may not be super authentic, but I do what I want in my kitchen. This recipe makes a MESS of tacos. I don’t mean mess as in they are messy, I mean mess, as in they make like 500 tacos (not really, but close). They are quick, delicious, filling, mess-free, not a ham and cheese sandwich, and they also reheat great!

Let’s get in the kitchen and make some Chicken Street Tacos!:

Also, some salsa. I forgot that in the photo. And, cheese is pictured in this photo. I’ve officially taken the cheese out of the recipes because after hearing many people say they can’t taste it so they add it later. I did it and thought the same. So grab cheese for later if you want!

Here are the exact tortillas I used for this recipe.

Grab a large skillet and lightly spray with a bit of cooking spray. Any kind will do.

Throw in your chicken, onions, taco seasoning, and cilantro. (Note: I used 1/2 a packet of taco seasoning because I didn’t have any homemade mixed up. Homemade or store bought works great, but if using store bought- don’t use the whole packet. It’s too overwhelming.)

Stir it up and cook over medium-high heat until the onions are bit soft.

Next up throw in a can of the non fat refried beans.

Add the greek yogurt and salsa. Stir until combined well. Then set aside.

Every four-five tortillas I would stop “frying” and fill the tortillas up with the chicken and bean mixture. You can do it after every one that you fry, or cook a few and then fill. It’s up to you.

Once they’re folded up- line them on a cookie sheet and pop into a 425 degree oven for about 5-8 minutes (until golden brown and they are hard to touch).

You’ll have to do this part twice because this makes so many tacos. (Good for feeding your neighborhood… or just you. Either way, it’s fine)

How to store & reheat:

Wrap tacos in foil to prevent them sogging up, yep “sogging up” is a technical term.   I wrapped three at a time. When I went to reheat, I took them out of the foil and laid flat on a cookie sheet in a 400 degree oven for about 10-12 minutes.

You could easily halve this recipe, but I really like having lots of tacos to eat throughout the week. These would also make great appetizers for those upcoming football parties!

I topped mine off with a chopped mixture of romaine, purple cabbage, and carrots. Otherwise known as, a bag of pre-chopped salad mix from the store. It tasted perfect!  These would also be delicious with a mix of lettuce, cilantro, tomato, and fresh onion.

In the spirit of them being street tacos, I took them out and ate them while walking around on the street. I felt like it was my duty to test the theory. 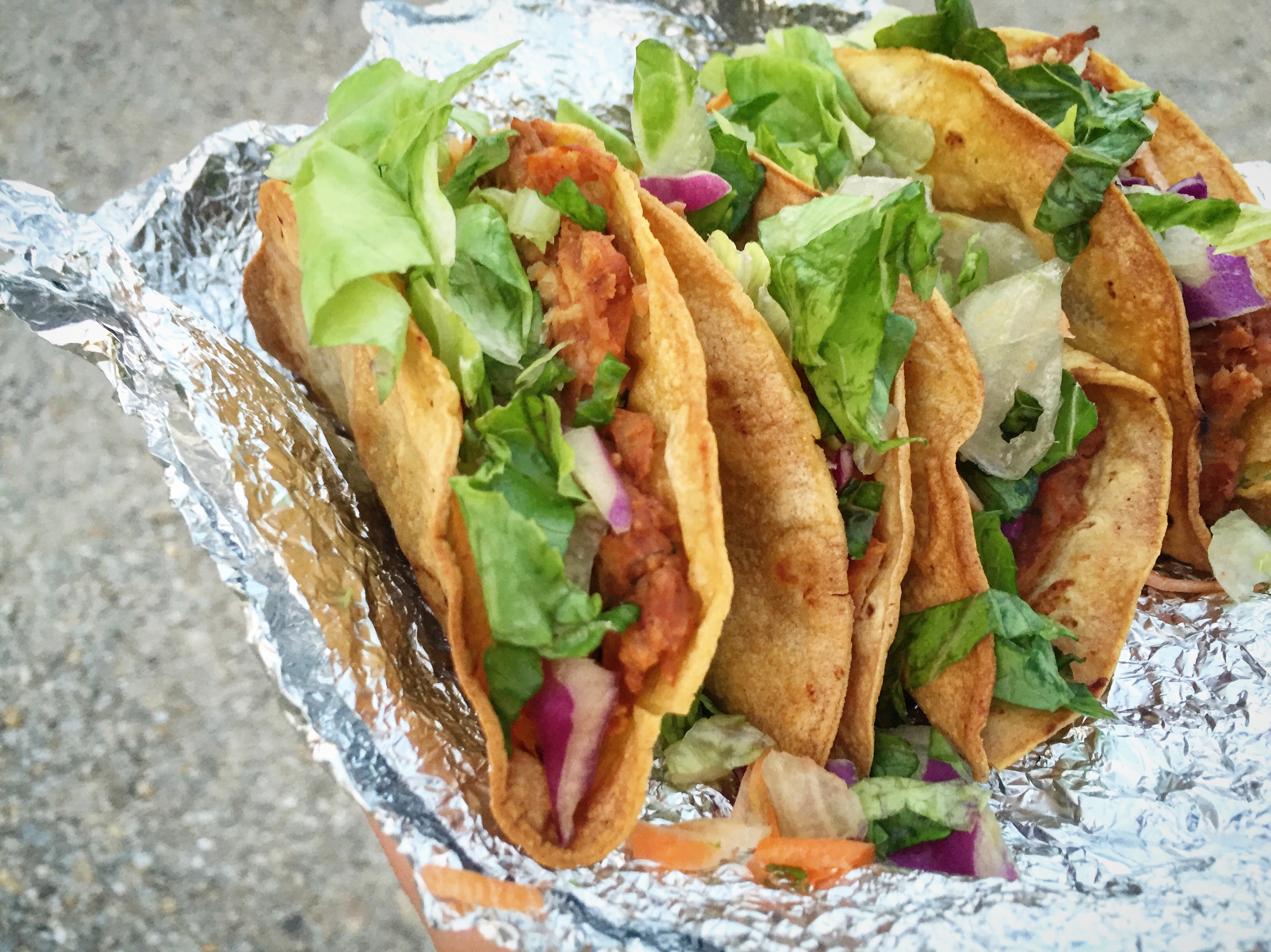 WW Purple/Blue: 4 Points for 3 tacos or 1 Point each