Hey y’all! Summer gets so busy. I’ve been trying to get on my computer for almost two weeks to work on a few posts and I am just having troubles finding a little extra time. If I could function off about 23 minutes of sleep I feel as if that would be incredibly helpful. Here’s what I’ve been up to:

Enough about what I’ve been up to. Let’s talk about this Bacon Bell Pepper Frittata! Essentially a Frittata is eggs and anything you want to put into it. I’ve been making different versions of a frittata for so many years. It’s kind of like a kitchen sink salad, but not a salad at all. In my case, I take whatever needs to be eaten up before it goes bad, chop it up, throw it in a pan, add eggs, maybe some cheese (always cheese in my case), and bake it. Somehow, It almost always turns out delicious no matter what you put in it! Frittatas are so easy, but sound a lil fancy so you can instantly impress anyone by putting a piece of delicious frittata in front of them. A couple months ago, I needed to use up some bacon and red pepper. This surprisingly was the first time I put the two together in a Frittata. Why had I never thought of it before? I’m not sure. Red pepper and bacon go together like peanut butter and jelly. They are just a match made in heaven. Truly one of my favorite food combinations on this planet. I know this isn’t the traditional way of making a frittata because I transfer it into a pie plate instead of putting the egg mixture into a skillet, cooking a little, and then transferring the skillet into the oven to finish cooking. The truth is, the first time I made a frittata I didn’t exactly know how to make a frittata  so, I just winged it and it turned out so good. I’ve been making it this way since the first time. I’ve actually never even tried making it the “right” way because why mess up a good thing? Maybe I should call it a breakfast pie instead. Thoughts?

The other day while I was getting ready to photograph the frittata for this here blog. I had to swat away a hand and fork before I even had a chance to photograph the finished product. Eric is obsessed with this recipe. He even went as far as to say this might be his favorite thing that I’ve ever made. Out of all the years and out of all the recipes, this?! Oh well. If I am being honest, he says this a lot.  I don’t think he actually will ever have a favorite. Preheat your oven to 350 degrees and chop up a medium red pepper. Chop up half of an onion. And chop up some center cut bacon! Place the bacon in a  large skillet a fry for a few minutes before adding in the pepper and onions. When the bacon has cooked for a few minutes add the red pepper and onions. I realized while this was cooking I forgot to chop up a couple cloves of garlic. So, I just grabbed some minced garlic out of the fridge and added it real quick.  Over medium-high heat continue to cook until the bacon is crispy and the pepper and onions are caramelized. This will take about 8 minutes and it will create the most delightful flavor to add to your eggs. I promise. While the bacon mixture is cooking up. Grab a mixing bowl and add 8 eggs, 1/2 cup 1% milk, and just a tiny pinch of salt. (The bacon adds plenty of saltiness to this dish) Whisk it all together! Add about 3/4 cup of reduced fat cheese. I used Colby Jack made with 2% milk. I’ll never tire of a sight like this. Your bacon mixture will look something like this and if you can, try to resist putting a stop to making this frittata, grabbing a spoon, and eating this right out of the pan. I promise that has never happened over here. Not once. I put it in a proper bowl first, of course. With a slotted spoon, remove the bacon mixture from the pan and add it to the eggs so you don’t get much bacon grease in it. You can also move it to a paper towel before adding it to lose a little extra grease. I don’t do this, but you sure can. I read somewhere once that people who eat bacon live longer. Add the mixture to a pie plate that has been sprayed with cooking spray. Place in a preheated 350 degrees oven for 30 minutes. Remove it from the oven and it’ll look somethin’ like this. Top it with some green onions for color and a lil extra flavaaaa flav! Put’r on a plate, grab a fork, and enjoy! If this is your first time stopping by my lil ol blog, then try this immediately.

If this is your 70th time stopping by my lil ol blog, then try this immediately.

Please.  I wish I could send ya’ll a piece of this. It’s a bite of heaven. 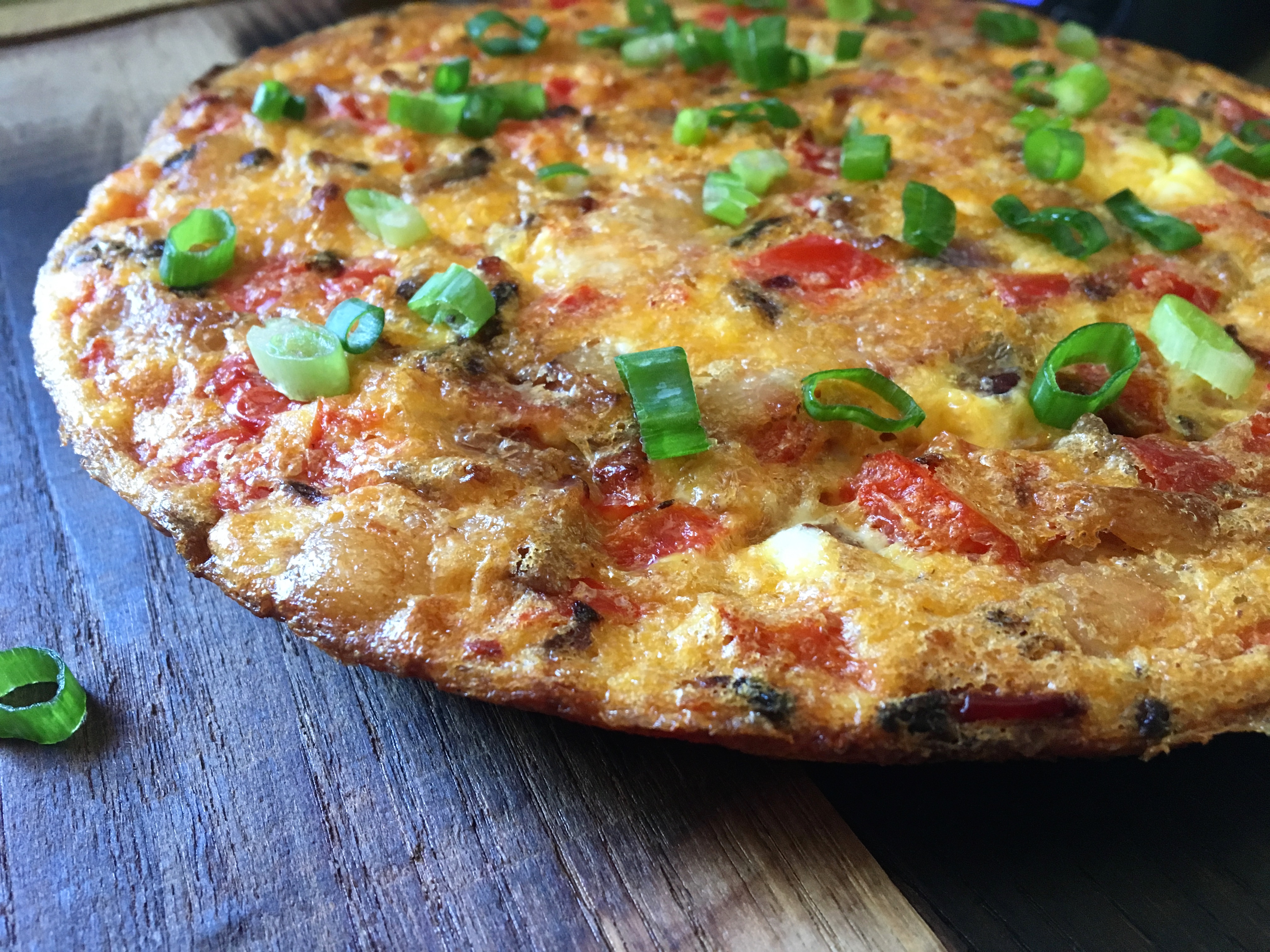 Serving size: 1/4 of the frittata

7 Point Plus (calculated with My Score Plus)

Want to know when I dish up a new skinnyish recipe? Sign up for my newsletter!

Sign up to get new recipes straight to your inbox!